From Russia with Lust 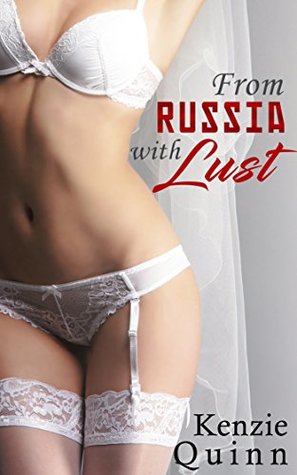 When James gets drunk, he has a bad habit of ordering extravagant items online. He doesn’t remember buying anything after his wild birthday celebrations — until a sexy Russian mail order bride appears on his doorstep.

Karina is ready to move in and start her wifely duties: cooking James breakfast, teaching him yoga, and trying to consummate their relationship. James would love to ravage his new bride, except for one problem — he has a boyfriend.

James doesn’t want to choose between a hot, very flexible young woman and his sexy, committed boyfriend. If birthday wishes come true, he won’t have to.

This story can also be found in the bisexual ménage bundle GETTING IT ON-LINE by Kenzie Quinn.

Excerpt from FROM RUSSIA WITH LUST:

When James reached the end of the sequence, standing straight at the top of the mat, his erection tented his PJ pants. Karina acted like she didn’t notice, but there was no way she hadn’t. A light sheen of sweat broke out on James’ brow as they worked through sun salutation again, this time Karina performing the moves beside him. Her body flowed like water, her reassuring smiles infectious, her tight ass keeping his dick full and hard. Every time she touched him to reposition his body in a new move, it became a little more sensual, her hands a little firmer and lingering a little longer. Maybe there was something to this whole yoga craze after all. By the time they were finished James felt refreshed - half relaxed and half buzzing with sexual arousal - and mostly recovered from his hangover.

Karina plucked at his damp t-shirt, clinging to his sweaty torso. “Was good workout, yes? Time for shower?”

Her porcelain skin glowed with a healthy sheen. He wanted to bathe her with his tongue. It seemed a shame to let the shower wash away her sweet sweat. But James said, “Shower sounds good. You go ahead.” He watched her walk to the bathroom with a swing in her curved hips, her bouncy butt begging for a pinch or slap he barely held himself back from giving her.

She didn’t shut the door all the way. James caught a flash of long, lean back and perky, rounded ass as she stripped out of her bra and shorts. James closed his eyes and let his head fall back, begging the universe to give him strength. He had better log into his AnastasiaDate account and sort this out before he either gave into the gold-digger’s scheme or took advantage of an innocent girl.

James had just figured out his password when Karina called him from the bathroom. “James! James, you must come!”

His head shot up from his phone. Did she see a bug in the shower? Had she slipped?

He ran to the door and pushed it open a little wider. “Karina?”

He stepped into the steamy bathroom. The shapely shadow of Karina’s lovely naked body showed through the sheer plastic shower curtain. She pulled it back, sticking her head around the edge with her long hair bunched into a bun on the top of her head to keep it from getting wet.

Half of a wet, full boob distracted him. “Uh…”

“First breakfast together, first workout together, we must have first shower together!”