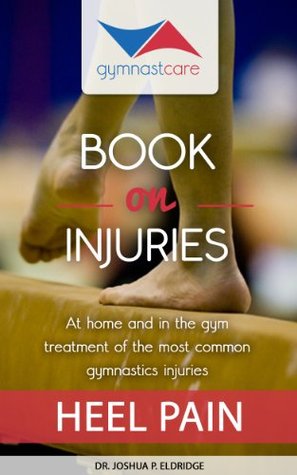 Sever's disease, or heel pain in children, is a major injury for a young athlete. In this chapter of the Gymnast Care Book on Injuries, we go in depth on how to treat the core symptoms of Sever's and how you can prevent it in the future. The protocol listed here has been used with thousands of young athletes with amazing success. You can also use this protocol with soccer, football, lacrosse, runners, and many other athletes that suffer from Sever's (heel pain).

The Heel Pain edition also includes how to videos!

The Gymnast Care Book on Injuries, Heel Pain Edition is the at home protocol we've used with thousands of gymnasts to reduce heel pain, also known as Sever's Disease.

We walk you through how to reduce heel pain and get to the root of what's causing your gymnast's pain. Here's a sample from the Gymnast Care Book on Injuries, Heel Pain Edition:
Heel pain in the child and adolescent gymnast is a condition referred to as Sever’s Disease. The gymnast’s skeleton is made of bones and long bones, and these tend to grow from the ends. Bone growth occurs at the ends of bones or in regions that are well defined. These regions are called “growth plates.” Growth plates, because they are active areas of change, are weaker than surrounding mature bone that has completed growth. Sever’s Disease is an irritation and an inflammation of the growth plate in the heel.
In gymnastics, we produce the “perfect storm” for Sever’s. Gymnasts are encouraged to point their toes, thereby utilizing their calf muscles. These muscles combine to form the Achilles tendon which inserts on the calcaneus or heel bone. It just happens that the Achilles tendon attaches just above the growth plate in the heel. This growth plate can be aggravated by the constant and rapid contraction of the muscles of the calf. The tensile forces applied by the calf muscles through the Achilles tendon to the calcaneous (heel bone) can be so large that the weaker growth plate is irritated. Bone is a strong material, but bone is strongest when the forces are applied via compression. Bone is considerably weaker when the applied forces come from tension, bending, or shear.
From below, the growth plate can be irritated by running around the gym in bare feet. Many gymnasts that experience heel pain are over-pronated in the feet or have flat feet. Over-pronation refers to a natural foot position where the foot tilts toward the big-toe side. Over-pronation also puts pressure on the growth plate in the heel by a gait that is altered.
Rest rarely decreases the symptoms of heel pain in gymnasts, but if your doctor recommends rest, you should follow through or suggest the following protocol and see if he/she concurs. It is recommended that gymnasts stop doing anything that causes an aggravation of their symptoms. This is important so as not to continue causing irritation to the growth plate.
The following is the Sever’s Disease protocol used with thousands of young gymnasts…